Since we are all social distancing and some of us are staying home due to the COVID-19 Pandemic, Chris did some social distancing in the turkey woods and managed to bag a couple of big ol' gobblers.  I got to chat with Chris via email about his Spring 2020 Turkey season and how its been going so far.  Chris gave us a good story and some advice on how to hunt those big gobblers below. - Graham Eldridge 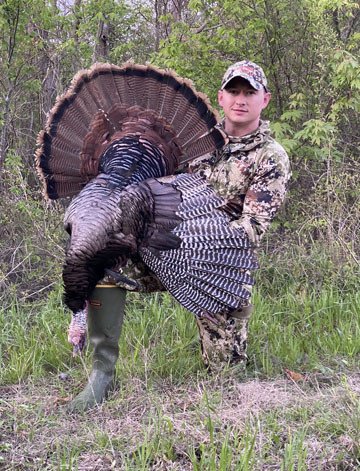 “High expectations and sleepless nights lead me into the 2020 spring turkey season. Unfortunately, I was unable to go the first two days of season due to work. This was a tough decision on my part since it would be the first season opener I have missed. It all worked out for the best because the weather was not good for killin' turkeys on the first couple of days anyhow. So I elected to save my limited vacation days from work and hunt on the third and fourth days of the season. ”

“Tuesday night after work I got everything ready to go for a highly anticipated hunt the next morning. My alarm went off early Wednesday morning and I jumped up, got dressed and was out the door! I arrived at my hunting spot pretty early and headed up a hill side. As the sun popped up I heard birds gobbling in several different directions and mother nature began to come alive all around me.”

“I heard a bird gobbling about 100 yards away. I had hunted here before and I knew the terrain pretty well. I used this to my advantage and headed towards his direction along the ridge. I got in position and setup on ‘em within about 75 yards of the turkey. I sat quietly watching until the bird came off roost and set down on the ground. He hit the ground and gobbled and I softly began to call to him. The turkey gave me an instant answer. Me and this turkey talked back and forth for nearly an hour and unfortunately, I had to call it quits. I had to hurry back to the truck and get to work. That turkey haunted my thoughts all day while I was at work and I’m sure it would have haunted yall’s to. I knew that turkey would be back in there though so there was hope for a second chance. ”

“Finally, the end of the workday rolled around and I hurried home, grabbed my hunting gear and B lined it back out to that bird. I headed back to the ridge where he was roosted at and I set there silently waiting. About twenty minutes into my hunt the crows and a chicken hawk began to carry on and I hear a turkey shock gobbling about 100 yards form me. I sit silently, just listening. I didn’t want to alert him with a hen call so I waited to see which direction he was feeding before I called. Another ten minutes go by and he gobbles again and he was now 75 yards just off the ridge top. With my Woodhaven glass call, I did some soft two and three note yelps, some purrs and feeding clucks. He immediately gobbled. At this point the fever set in! The excitement in hearing his gobble had me wanting to continue calling but my previous hunting experiences knew that was not the best decision. I raised my gun and set there in silence. Ten more minutes go by and I hear drumming and walking just off the ridge top. My nerves really begin to set in at this point and I’m second guessing everything in my mind. He kept walking down the ridge just out of sight so I used my Woodhaven diaphragm call and hit him with a soft two note yelp sequence. I also used my hand to softly scratch the leaves on the ground. This was all that gobbler could take. He then fired off gobblin’ and topped the ridge. As he topped the ridge he saw my strutter decoy and came running to within 20 yards of my position and it was all over for him. After the shot I grabbed my bird, looked to the sky and thanked the man for the opportunity to harvest another good gobbler. I hurried home before dark so I could show my three year old son and get some pictures of us together with my harvest. I couldn’t wait to tell him all about it.” 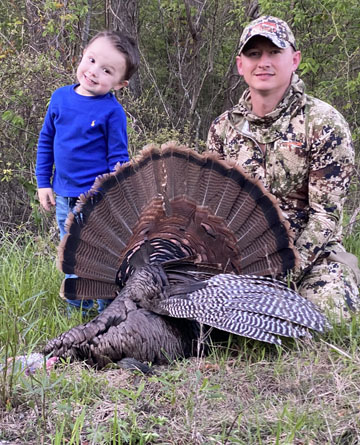 Round 3 Hit'em with the Jab

“Later that night as I was getting my gear ready for the next morning I kept thinking about the other birds I heard earlier that morning. This gave me high expectations for a successful hunt the in the morning. My alarm clock went off and once again I B lined to the truck and headed up to the hills. I walked over to another ridge in the direction where I had heard a turkey the morning before. I setup there and I began waiting for Mother Nature to begin waking up. Daylight started breaking and turkeys began to gobble. I could hear several in the distance and I was just fixin’ to head in that direction when I heard a close gobble. Instantly I began to head his way. I came up on a logging road which wasn’t covered in leaves so I was able to slip in quietly on this bird. He hadn’t gobbled again since I first heard him and I refrained from using a location call. I don’t like to hoot or locate call when sneaking up on turkeys. In my opinion hooting or location calling alarms the turkey, I like to let them do their own thing. Next thing I know, out of know where he fired off. I hit the deck! I realized I was way closer than I had originally thought. I’m guessing this bird was facing away frsm me when he gobbled the first time and was faing me the second time and this fooled me into thinking he was farther away. For all I know it might be another bird but regardless I’m about to shoot it in the face. The shadows were still low so I dropped to my knees, placed my strutter decoy in the ground, and crawled to a big cedar tree less than 20 yards form my strutter decoy. I’m setting there already a nervous wreck wondering if I bumped this turkey by spooking it and he fired off again. It’s on now! I could hear him drumming and I could see him periodically trough the tress and leaves in roost going in and out of strut. He gobbled and it felt like the ground was shaking. I just sat there quietly, waiting. As bad as I want to sometimes, I never like to call to them while they’re on roost. I personally feel like that is one of the first calling mistakes you can make.”

“I watch this gobbler pitch down into the logging road and automatically go into full strut. I gave him one soft three note yelps and scratched some leaves beside me and he fired off. He then eased his way towards me in full strut. His ol’ head was solid white and I was fit to be tied. It’s on now! This gobbler strutted in place for what seemed like an eternity which was really just a few seconds. Finally he came around a curve in the logging road and saw my strutting decoy. He immediately came out of strut. This gobbler wasn’t spooked but was looking around and it was obvious he wasn’t the dominate bird. I was getting nervous at this point and trying to hold my composure was a chore. I reached behind me and scratched leaves and yelped very softly with my diaphragm call. This gobbler went back into half strut and walked around the logging road and at this point I new he was not going to finish his stroll to my decoy. I had to make a decision. He was about 50 yards from me at this point. I was loaded up with #9 TSS and I had patterned my gun at this range and I was confident I could easily and ethically harvest him. A 50 yard shot isn’t necessarily a shot I like to take. In my opinion, turkey hunting is about getting them close and not how far you can shoot one. I was set up on a wide open logging road and this gobbler was 100% comfortable in his spot. I knew there wasn’t much room for error so I eased my gun off of safety, put my bead on his neck right where the feathers and neck meet and I softly called a two to three note cut. He stretched that ol’ white head up and I squeezed the trigger off. The gobbler flipped backwards from the impact of the #9 TSS. I jumped up, ran over to where that gobbler was and it was over. It had ended just as fast as it began.” 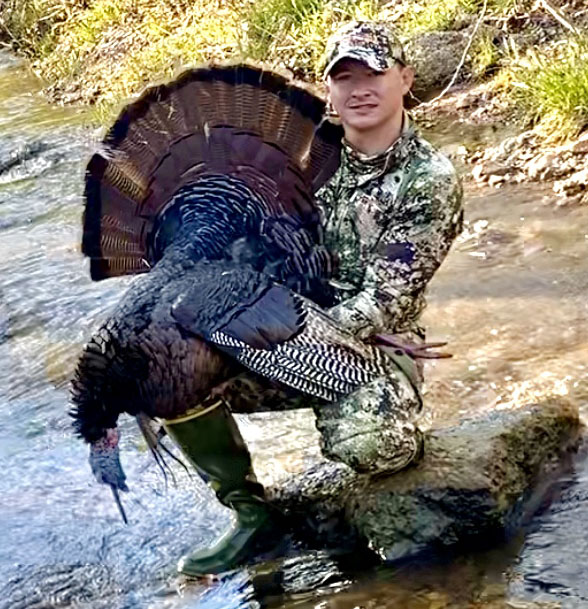 “I was blessed to have harvested two good birds in two days. That tagged me out here in Arkansas. On to another state!”

What is some advice you would give to a beginner when it comes to turkey hunting?

“One thing I always try to remember is no matter how excited I may get while that bird is up on a limb gobbling or on the ground strutting do not over call. I believe you can educate them faster than you think. What I mean by this is they can pick up on your location or the quality of the calling and get spooked real quick. Also always be familiar with your equipment. Pattern your shotgun, so you know its lethal range in order to make ethical harvests. Know you terrain and your personal physical limitations. I’ve got on birds and the next thing I know I’m turned around and I’ve walked 4 or 5 miles back in the woods. Most importantly make sure you always know what you’re shooting! Hope everyone has a great season still lots of time left, good luck and be safe!”